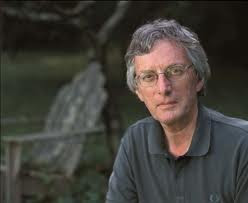 Charles Wright showed up on my reading radar only four or five years ago.

Since then I have sometimes wondered why I persist in reading anyone else.

His publisher in the States is Farrar, and as far as I know, only Stride has published his work over here. Laudable though that is, the Stride books are of poor quality and scattered with misprints - particularly damaging to a poet like Wright who uses the line so creatively.

Wouldn't it be good if Bloodaxe furthered there reputation for bringing eminent U.S. poets to these shores by publishing a nice big selected? Or is that more up Carcanet's street?

Anyway, here's a short one I pulled off the net.

Clear night, thumb-top of a moon, a back-lit sky.
Moon-fingers lay down their same routine
On the side deck and the threshold, the white keys and the black keys.
Bird hush and bird song. A cassia flower falls.