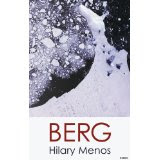 Congratulations to Hilary Menos whose collection 'Berg' has been awarded the 2010 Forward Prize for Best First Collection.

Here are 3 of Hilary's poems to wet your appetite.

After the Larsen breakout of ninety-five,
when a mound the size of Rutland calved with a howl
into the Amundsen sea, and bergy bits and growlers
surrounded Cape Longing, we were on standby.

Glaciologists from Colorado to London
argued over fracture mechanics and bed forms.
Every satellite map looked like a storm
breaking. We put a watch on the ice tongue

Now everything mattered; melt water ponding,
the crystallography of frazil ice, the hole in the ozone layer
the thermodynamics of polar-bear hair.
We sandbagged East Anglia, Holland

They came like brides, majestic over Barking Reach,
queued to check-in at the Barrier, their tabular tops
reflecting weak sun, waltzed towards Wapping
and Wandsworth, cold and hooded, each one

like an inmate from some asylum holding the flowered
hem of her ancient slip too high up her pale thighs,
a thousand mile stare in her eyes,
saving the last dance for the Post Office Tower.

When hell freezes over, he swears by three things.
Lard on the lips. Two pairs of socks. His wheelbarrow,
crucial on the steep when even the Ford won't grip

This morning he opened the door to a clean sweep
right up to the dairy's slate slab step, frost
spangling the tank, and briefly he's ten years old

but now it's taking the piss. Grunt glares at the snow
and it glares back. He kicks the water trough,
heels a hole through the ice. First floods, now this,

the daily round, in arctic sludge. Milk substitute
for the calves, a scoop of pellets for the fowls.
He rolls out a silage bale in the cubicle house

and forks it to the cows, sets a can at the yard tap
drumming up chilly water for the dogs,
for the lambs in the barn, the fifty hogs on the hill.

A neighbour phones on the scrounge for the loan of a box
and a tow out of the ditch where he spent the night.
Grunt goes off to do what he does best

apply excess force in a tractor. He's back at noon
to fix a burst pipe, by which time two sheep on the hill
haven't moved for an hour; are past fixing

Dirty snow starts to fall as Grunt, grunting,
moils up the slope, hauls one into the wheelbarrow,
picks his way down, and barrows up again.

I stand on one leg. My brother is watching TV.
Outside the other kids are bombing the hill on a go-kart.
My father gouges his pipe with his penknife,
dumping black tar into his cold baked beans.
My mother hates it.

Upstairs, water seeps over the rolled enamel rim,
steals down the side of the bath and through the boards,
easing its way down the white plastic flex
of the light fitting over my father's head
at a rate incalculable to man.