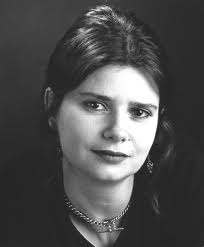 You’ve been living for this for weeks
without knowing it:

the moment the house empties like a city in August
so completely
it forgets you exist.

Light withdraws slowly
is almost gone before you notice.

In the stillness, everything becomes itself:
the circle of white plates on the kitchen table
the serious chairs that attend them

even the roses on the papered walls
seem to open a little wider.

It looks simple: the glass vase holding
whatever is offered –
cut flowers, or the thought of them –

simple, though not easy
this waiting without hunger in the near dark
for what you may be about to receive.

This morning don’t go down to the kitchen
in bare feet. Put on your gardening gloves,
fetch the dustpan and brush from the cellar
and sweep these pieces up quickly but carefully,
making sure you get every last sliver
from the darkest corners of the room
(later they may be held against you).
Wrap the fragments in newspaper
so no one cuts themselves.
Put back the dustpan and brush, the gloves’
upturned, amputated hands.
Make yourself a large mug of tea
with six sugars and a nip of whisky.
Stop shaking – he’ll be down soon –
you can hear his alarm going off,
heavy footsteps above your head, thudding down stairs.
Stop shaking I said. Swallow this note.

I want to go to your head tonight,
shake you up like a grand prix winner,
rocket to the ditzy stars,
set the moon's mirror ball spinning,
lead you on a merry dance.
I want to fizz right past your brim
and keep on fizzing.
I want to get the wolf in you to whistle,
the world to wobble
God to get the giggles.

Tonight I'm Marilyn
lying in this bath
of creamy magnolia.
I'm just dreamy,
blowing frothy kisses,
flirting in my foam bikini.
Can't you see
I want you in a lather?
Darling I'm your upper.
Pop me.

Esther Morgan studied at UEA and received an Eric Gregory Award in 1998. She edited the poetry magazine 'Reactions' for four years during which time her first collection 'Beyond Calling Distance' was published by Bloodaxe (2001) and was awarded the Aldeburgh Poetry Festival First Collection Prize. Her second collection 'Silence Living in Houses' (Bloodaxe, 2005) enhanced her reputation and among other things led to her tutoring for the Arvon Foundation. 'Grace' is her third collection.

All poems reproduced with the permission of the poet.
Bloodaxe Esther Morgan