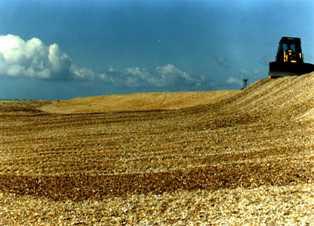 Here's something I wrote after visiting Dungeness on 8th February last year to mark the Centenary of Elizabeth Bishop's birth.

I think the people live here because the stone has managed to flower, and the way the land and sea and sky form a continuum vaster than the eye can encompass, must allow them to see themselves and each other more clearly. If one were Elizabeth Bishop, one would probably think of the line ‘awful but cheerful’.

Perhaps as a gesture of solidarity, there are no walls or fences or boundary marks of any sort: only patches of strange, tenacious flora growing against the odds in shingle stretching from door to door: sea kale and sea cabbage, dwarf broom and dwarf hawthorn, twisted and stunted by the unrelenting wind.

Above the steep shore ridge, bony fishing-boats blister, waiting for the waves below to cease white-cresting in every direction. Around them, the litter from previous expeditions: smacked- off fish heads, crab legs, scraped-empty crustaceans, broken winches, frayed rope, yards of tar-sticky net, punctured buoys, unpaired shoes, a disemboweled mattress, a gaping fridge digesting cartons printed in another language.

Under the stern of the Emma Jayne, a charred hollow of black and red pebbles shows how the earliest rising fisherman thought to warm himself and his crew. Further along, yellow toy diggers attempt to redistribute ever-accumulating deposits of long shore-drift in a Sisyphean cycle of toil. Sometimes a matchstick couple can be seen bending their will against the sky-line, oversize gulls wheeling hungrily overhead in the bruised light.

On the hazy horizon the ominously mute power station, the size of a small city, steams in its warm emissions. From there, long, drooping cables radiate like the lines of a railway junction, throbbing above the reedy, disused gravel pits.

Silence has descended on everyone here like radioactive fallout: a contagious reticence. After a short stay you feel it enter and explode softly like a depth charge, its disturbance travelling outward with you when you go: alive and sometimes flourishing, like the beautiful outbursts of lichen rooted in the scarred rocks.