Where Have You Been? 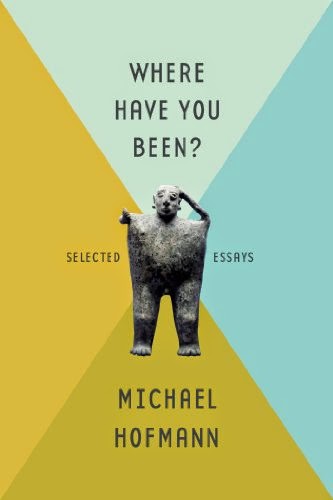 Festschrifts and translations of Gottfried Benn are all well and good, but I can't help thinking this absence in my life isn't going to be filled until Michael Hofmann publishes another collection of his own poetry. In the meantime, here's this appropriately titled book of essays to look forward to. Published by Norton later this year, it looks like being a reprint of his prose selection 'Behind the Lines' (Faber, 2001) for a U.S. readership. The original volume didn't go to a second edition, and with the spread of Hofmania in the U.K. in recent years, it's been difficult to get hold of a copy at a reasonable price. In a way its publication is reassuring since it means Hofmann hasn't yet completely 'done a Rimbaud', but his long poetic silence, if not a repudiation of poetry, still haunts and fascinates other poets in equal measure.

Readers of Hofmann's poetry naturally hope he will publish more again one day. Dig a bit further, especially among poets, and it's possible to detect that Hofmann's apparent estrangement from his muse has an unsettling effect; as though there is something frightening about contemplating the possibility of a life without writing poetry. Without poetry, some poets fear they will be overcome by 'a deluge of nothing'. Others simply cannot believe that writing poetry might not represent the be all and end all in a person's life; that someone might not be able to explore their full potential only by writing poetry. But what of the man? Unless you happen to be speaking to someone who knows him, rarely is any attempt made to empathize with Hofmann's circumstances. Again, it's as if it is impossible to imagine that he may have discovered other, necessary ways of being, or a more satisfying way of living than writing poetry.

Who knows? He may surprise us all some day by publishing a backlog of poems, or simply carry on what looks like a commitment to translate the entire oeuvre of Joseph Roth. Either way, I'm grateful for the poems we have. I'd feel excited at the prospect of new work, of course, but in no way could I begrudge someone for acceding to whatever changes it was necessary for them to make or adapt to in their life. On the contrary, just as his poetry has been influential to so many poets, his not-writing might also inspire if it encourages us to question our lives, to ask of ourselves - of the person we think we are: where have you been?